Inside the Innovators: Rebekah Johnson on Communications Advocacy & Regulatory Compliance

Answering the Call to Restore Trust in Consumer Communications 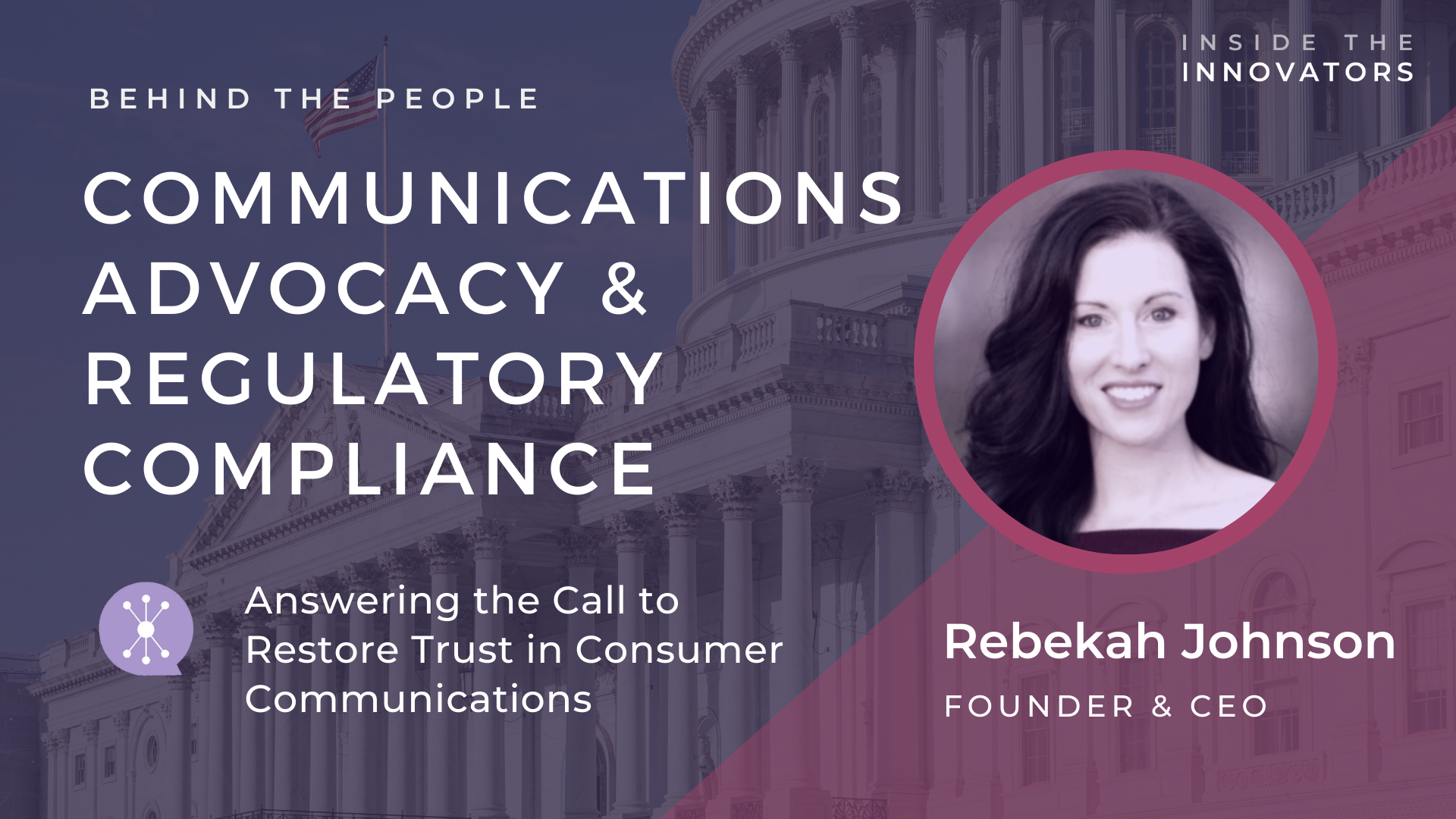 What motivated you to create Numeracle?

There was a real sense of duty and responsibility to launch Numeracle. Even before founding the company, the sense of duty and responsibility to protect outbound communications really weighed heavy on my heart and was something I couldn’t shake. I realized very quickly that I was the only person in this ecosystem that was correlating what the carriers and the FCC were doing to stop fraudulent calls with the impact it could, and would, have on legal businesses. I was far more than motivated. This life chose me and it felt like it was my responsibility to do this.

What led to the creation of the Enterprise Communications Advocacy Coalition (ECAC) as well as your leadership role within the organization?

Out of the same motivation to start Numeracle, I was in an advocacy role from day one and have always advocated on behalf of businesses even when they didn’t know that I was doing it. As I made progress with the FCC, with the major wireless carriers, and with Numeracle, that advocacy never stopped.

The only challenge was that I couldn’t keep up with the individual requests on my own anymore thus came the establishment of the Enterprise Communications Advocacy Coalition. We centralized into one location where many people could join and advocate for their needs across a greater group compared to individual companies and requests.

The ECAC pushes forward the respect that has been earned within this industry, starting with Numeracle, to solve a problem, putting me in the position of being the subject matter expert on regulatory impacts affecting legal entities’ use of outbound communications. My integration into the ECAC continues the level of trust that the federal level and the carriers have with our viewpoints on enterprises and protecting legal enterprise communications.

In this past year, which regulatory updates have impacted enterprise communications the most and how has Numeracle been flexible in addressing them?

What has affected enterprises the most comes from an indirect impact to them based on the regulations directed at voice service providers, like the TRACED Act which is centered around Know Your Customer (KYC) through a Robocall Mitigation Plan to implement STIR/SHAKEN.

Since day one, Numeracle’s core focus on KYC has delivered a pathway to trust and visibility in line with the TRACED Act’s objectives to establish widespread identity authentication. We’ve always kept pace with the industry and with each regulatory update made by the FCC, we’re staying one step ahead to deliver a solution and provide awareness to customers and industry partners.

Why is it important to follow regulatory news and FCC/FTC updates when it comes to a business's ability to effectively deliver a product or service in the telecom industry?

The voice channel is heavily regulated, no matter what industry you’re in, under the establishment of FCC guidelines and the enforcement of the FTC. Even more so, this channel is also leveraged by fraudulent actors, which have heavily changed how voice and messaging communications are used and should be regulated. While the FCC, FTC, State Attorneys General, and major carriers providing wireless services to the majority of subscribers are focused on stopping fraudulent traffic, you can’t do that in a vacuum without impacting legal entities.

At this point, it’s less about how an enterprise stays compliant with the Do Not Call Registry or the Telemarketing Sales Rules, or the TCPA. It’s more about how the efforts and activities from the Federal Government to stop fraudulent traffic are impacting our ability to leverage this channel for the benefit of legal businesses and consumers.

What are some current discussions or changes happening at the regulatory level that you think will impact the voice channel this year and how are you preparing Numeracle and members of the ECAC to navigate those changes?

The current discussions are twofold. We have active Further Notices for Proposed Rulemaking (FNPRM) for gateway providers as well as network-level blocking by the major wireless carriers. From Numeracle’s perspective, those are items that we’re solving to protect and preserve the use of the voice channel. For example, we continue to push forward on the association of ‘Verified Identity’ to the telephone numbers being used to deliver outbound communications to prevent the harmful blocking of legal calls. There is an active ruling around how gateway providers will be treated that I believe will proceed so carriers will be able to block calls. If this is the case, we need to keep doing what we’re doing to preserve communications, making our service more critical for businesses to be able to verify their identity and disclose their telephone numbers in exchange for the protection of the delivery of their calls and the prevention of their calls being blocked.

With other items at the regulatory level, we have not received any other FNPRMs but the FCC is absolutely still active. FCC Chairwoman Rosenworcel has stated that messaging will be the next area that the FCC will target to stop fraudulent traffic. Again, it’s always going to be about protecting consumers so we’d be naive to think that there won’t be negative impacts on legal messaging. That’s one that we need to stay ahead of and we (the ECAC) will absolutely be involved with the filed comments around any proposed rules from the FCC on messaging.

From a regulatory perspective, what would you like to see improve in the telecom industry and why?

I would like to see the industry recognize that it takes more than themselves to solve the problems we have, especially when related to fraud on a global scale. I’ve worked in combatting fraud on the healthcare and payment processing side and know this is not the first time an industry has had to collectively fight against fraudulent activities. I sometimes see too much localized thinking, when looking more broadly at other industries and applying those learned lessons where there has already been success is a quicker path to execution. There still isn’t a level of collaboration in the telecom industry that needs to occur for the successful protection and preservation of a diversified commerce channel.

Working in such a fluid environment between leading a company and advocating on behalf of consumers and enterprises, what are the next steps you see yourself and your organizations taking?

With the duty and responsibility I felt to advocate on behalf of consumers and enterprise communications through Numeracle and the ECAC, I see this next translating into the new activities emerging on the messaging side. Not only is there an internal sense of duty already, but we are already actively starting to respond to the challenges arising in the 10DLC space. As we innovate to solve customer requests for Verified Identity in the messaging channel, we’ve identified so much room to grow and take leadership in this space to preserve omnichannel communications at large.

Founder and CEO of Numeracle, Rebekah Johnson is the industry’s leading expert in solving the challenges surrounding the improper blocking and labeling of legal business calls and returning trust to enterprise communications through the establishment of trusted identity. With over ten years of regulatory government and compliance experience, businesses have leaned on Rebekah’s expertise to guide them through the evolving complexities of maintaining trusted identity in a changing ecosystem.

Prior to founding Numeracle, Rebekah served on the FCC’s Robocall Strike Force on behalf of the Empowering Consumer Choice Working Group. She continues to act as Founder and Coalition Leader of the PACE Communications Protection Coalition, Founder and Chair of the Enterprise Communications Advocacy Coalition (ECAC), and represents the voice of the enterprise through her leadership on the ATIS IP-NNI Task Force.