From ‘Authentic, Notable, and Active,’ to ‘Phone, Credit Card, and $8 a month’

Twitter misses the mark on identity verification yet again 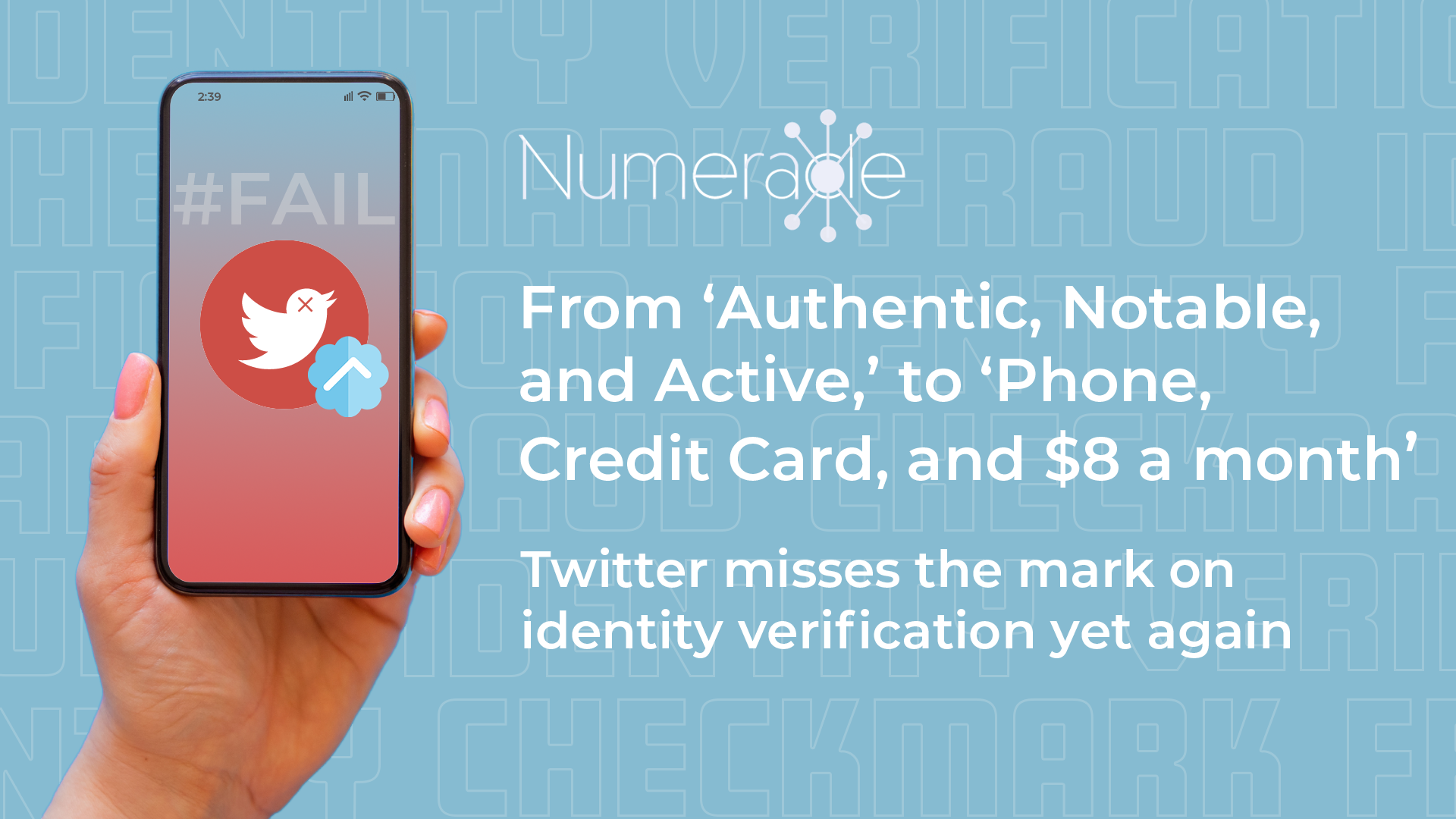 Elon Musk has had the keys to the Twitter castle for only two weeks. His rapid sweep of changes has only solidified the platform as an untrustworthy content provider, not a truth provider for news or media.

With the launch of its new pay-for-verification program, Twitter Blue, fake accounts tweeting misinformation have all but taken over the platform.

There should be no confusion in identity. When verification is driven by monetization instead of truth and transparency, trust crumbles and exploitation reigns.

The only way to establish trust in identity is via a KYC-based entity vetting and verification process that goes layers deeper than simply being interesting enough to consider notable, savvy enough to spoof an Apple ID, and willing to pay Elon Musk $7.99 a month.

The History of the Blue Checkmark

To enhance the credibility of high-profile accounts, in May 2021, Twitter created a public application process for entities on the platform to request verification and the receipt of a blue checkmark.

It involved fulfilling requirements such as evidence of public prominence, a photo of a government-issued ID, a demonstration of active account usage, and more, depending on the type of entity you were.

On November 9, 2022, Twitter abandoned the previous application-based process for verification with the launch of Twitter Blue, a new opt-in, paid monthly subscription that adds a blue checkmark to your account without needing to meet requirements for identity vetting or verification.

If the platform allows entities to pay for the same status previously requiring vetting and approval, does the blue checkmark effectively become meaningless?

Requirements for Verification – BEFORE

Before November 2022, Twitter defined the blue checkmarks as a means to distinguish the authenticity of accounts of high public interest. As Twitter put it, it gives people “more context about who they’re having conversations with so they can determine if it’s trustworthy.”

To get a blue checkmark, entities on Twitter were welcome to submit an application to request verification via the following methodology:

The Verified (blue checkmark) status was determined by an eligible person or entity meeting Twitter-defined criteria deeming them sufficiently authentic, notable, and active.

To become verified, an entity had to belong to one of the six categories:

An entity from any of the eligible categories then needed to fulfill a specific set of criteria meeting authenticity, notability, and activity specific to that category to receive the blue checkmark.

Requirements for Verification – AFTER

Since November 2022, Twitter now defines the blue checkmarks as representing “either that an account was verified under the previous verification criteria (active, notable, and authentic), or that the account has an active subscription to Twitter Blue.”

Twitter will no longer accept new Verification applications under the previous criteria. Only accounts subscribed to Twitter Blue on iOS on or after November 9, 2022, are eligible for the blue checkmark moving forward.

Identity verification criteria:
To get a blue checkmark, accounts must meet the following criteria:

All accounts subscribed to Twitter Blue on iOS on or after November 9, 2022, will automatically receive a blue checkmark, which will persist for the duration of the subscribers’ subscription term.

Verified Identity, by definition, should be used to describe the status of an entity that has completed a KYC-based assessment to decisively conclude: the entity has been vetted and validated to be who they say they are.

The previous vetting requirements to obtain a verified Twitter account based on meeting notability, authenticity, and activity criteria only elevated accounts that were “popular, high status, and vocal” instead of validating accounts were who they said they were.

The new verification requirements validate nothing. But don’t worry, Twitter Blue subscribers’ blue checkmarks may be taken away at any time for any reason at all by Twitter.

As cited by AP News, Musk has said he won’t make major decisions about content or restoring banned accounts before setting up a “content moderation council” with diverse viewpoints. Numeracle has requested Musk consider an Identity Advisory group to bring industry identity providers to the table if he has any intent in creating a legitimate platform for trusted news and content to the global user community.

The Beginning of the End of Trust in the Blue Checkmark

In the live recording of “Elon Q&A: Advertising & the Future” on Twitter, Musk confirms the deliberate decision to implement a rudimentary verification process in his comments, “I mean someone has to have a phone and a credit card and $8 a month, so it that that's the bar."

“As soon as Musk allowed account holders to jump to the pay-for-verification model, we saw the complete meltdown of trust in the platform coming. This is the exact formula that allowed fraud to run rampant in voice and messaging.”
— Rebekah Johnson, Founder & CEO

Faith in the platform’s validity and security continues to sink as three of Twitter’s security and privacy executives quit and FTC investigation looms on the horizon.

In a community as active and vast as Twitter, consumers can’t be expected to trust communications when the communicator's identity is in doubt. Without true identity verification, the verified checkmark is a facade that means nothing, and Twitter becomes a platform for pay-to-play content providers of unknown identity instead of truth providers.

Is there value in anonymous Tweets?

Anonymity is the state of being unknown. Twitter does not have an anonymity issue. It has an impersonation issue.

Having a validated identity based on fact is critical when one’s posts are meant to come from a specific identity, such as a government official, pharmaceutical company or celebrity. Numeracle is not suggesting all accounts must expose the identity behind the posts.

Anonymity brings its own value to a platform like Twitter for situations where the message stands alone from identity. An example can be found as it relates to women under persecution for protesting against the hijab. Should there be a safe place for individuals to be heard and protected from being known?

At the current rate Twitter is experiencing drastic changes on an hourly basis rendering a future outlook as clear as a black hole.

‍Numeracle is the creator of the first Entity Identity Management™ platform for communications. Built on a KYC-based entity identification and verification process to establish Verified Identity™ in voice, messaging, and beyond, Numeracle has applied an industry-agnostic framework of customer due diligence and fraud mitigation to establish trust down to the identity of the originator of the communications. End-to-end business-to-consumer trust starts with identity.