STIR/SHAKEN didn’t stop your Spam labeling, did it?

The Continued Role of Reputational Analytics in Call Delivery 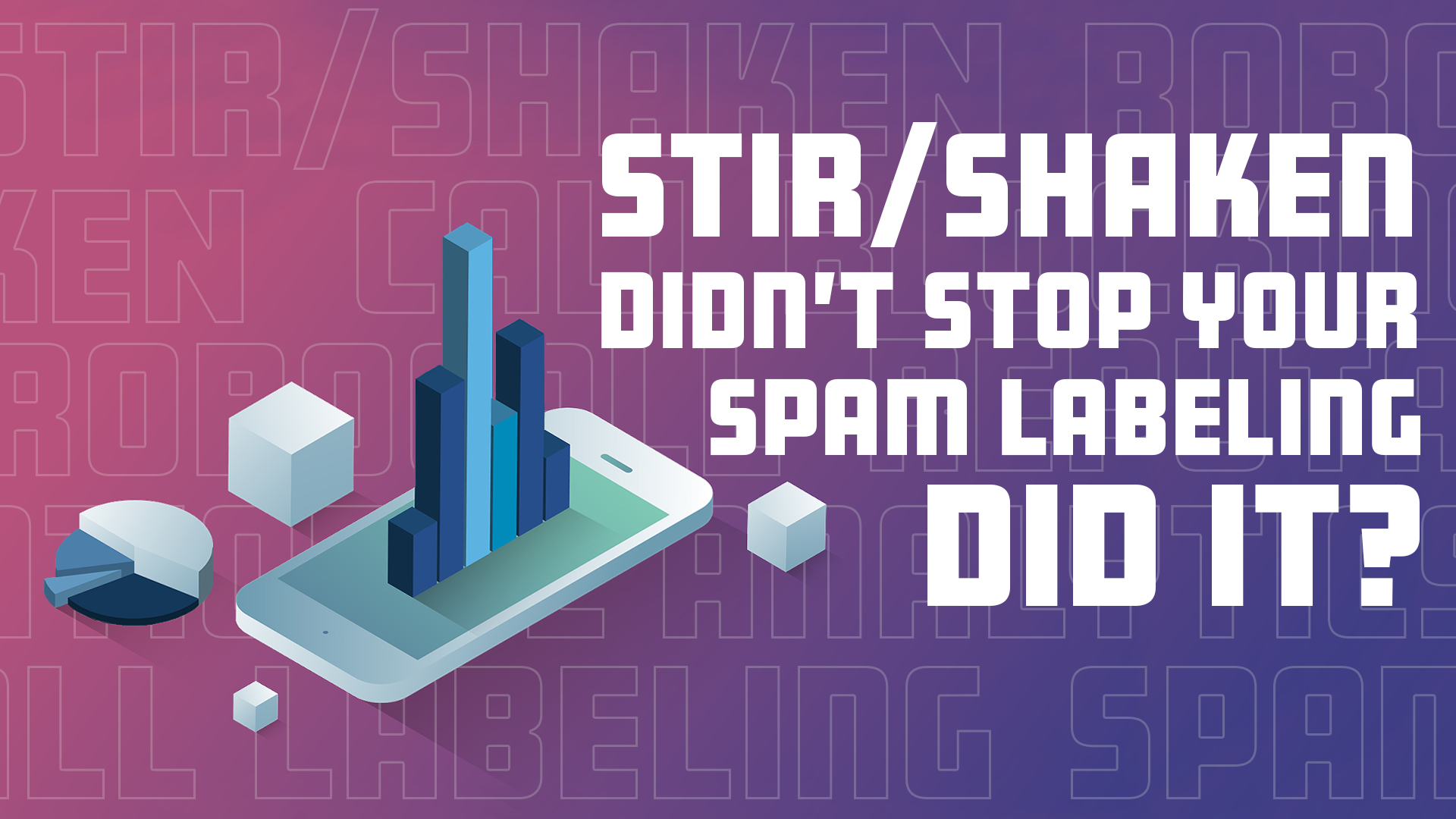 To combat the number of illegal phone calls plaguing consumers and carriers alike, the FCC instituted the STIR/SHAKEN Caller ID Authentication framework to prevent illegally spoofed calls from originating and traversing the voice network. The problem is, many were falsely led to believe that the June 30th STIR/SHAKEN implementation deadline would take care of every Spam call, Scam Likely call, robocall, telemarketing call, etc.

And while the framework has helped so far, it has not, and will not, completely block or eliminate spam or unwanted robocalls for you, nor does it ensure that your business calls will not be labeled as ‘Spam’ or ‘Scam’ in the future.

In this article, we’ll explore the role reputational analytics play in monitoring and managing how phone numbers are labeled and displayed to mobile users post- STIR/SHAKEN.

Following the June 30th deadline, there was a 90-day requirement that, come September 28th, Voice Service Providers (VSPs) were to block calls from carriers who had not submitted plans and were not listed in the Robocall Mitigation Database. Yet, similar to what happened after June 30th, the September 28th deadline has come and gone… and has widespread blocking happened yet... no.

Before, during, and after both deadlines, what’s clear is that call labeling is still a major factor impacting call delivery. This is driven by reputational analytics, not STIR/SHAKEN.

The STIR/SHAKEN Caller ID Authentication framework works by verifying the caller/brand’s identity along with its authorization to use the phone number to be displayed. To convey the authenticity of the identity behind the number calling you, STIR/SHAKEN provides a verification indicator or verstat, such as a green checkmark, and displays it on the end device called. This identifies that an incoming call is from a source authorized to use that number, as opposed to a bad actor who is illegally spoofing a phone number they don’t have the authorization to use or display.

Ultimately, the framework is designed to validate the source and identity of a call.
‍

The Role of Attestation

The term Attestation in reference to STIR/SHAKEN refers to the degrees of certainty (defined in levels A, B, or C) the service provider has in regards to the ownership and/or authorized use of the number being displayed in conjunction with the business’s identity (see Figure 1).

While STIR/SHAKEN validates the call’s origination from an authorized source, it does not weigh in on the intent of the call itself or whether or not you want to answer the call. This means that a STIR/SHAKEN verified call may still be an unwanted or spam call even though it’s a legal call with a known source.

Before you can even get to the concept of establishing trust around your calls’ reputation in today’s calling ecosystem, the first step is to ensure you’re working with a contact center who’s implemented STIR/SHAKEN. From there, you can have a conversation with them about how they’re offering you A, B, or C-Level attestation on the origination side of your call. When your call is then passed, or delivered, to the termination side, A-Level attestation (or B, or C-Level) becomes a STIR/SHAKEN data point.

Currently, carriers are not blocking calls that are not signed with an A-Level attestation. A call coming in that’s not signed: that’s just a data point. A call coming in that is signed: that’s another data point. These data points can then be used by reputational analytics to factor into and make decisions on whether calls come in labeled as Spam or Scam, but it’s only one piece of the puzzle, a single data point among many.

A call’s reputation displayed to a mobile user in the form of a Scam or Spam label is not the result of STIR/SHAKEN, it’s the result of reputational analytics at work (see Figure 2, Step 2).

People sometimes equate STIR/SHAKEN and call blocking and labeling as being the same thing, interchangeable, but they’re not. Call analytics take in a lot of different variables to determine the risk and reputation of a phone number within the ecosystem, similar to a credit score, with a number of different factors being taken into consideration with different weights to determine overall risk. The attestation level is just another piece of data factored into the equation with all of the other variables.

Analytics: The Scoring Behind the Label

Reputational analytics technologies employ algorithms varying across mobile networks, and are available as a free standard feature for AT&T, Verizon, and T-Mobile wireless subscribers. Agnostic to carrier-deployed solutions, applications like YouMail, can also be employed by mobile users to further filter and prevent illegal calls based on individual preferences.

As STIR/SHAKEN does nothing to weigh in on the intent of the call or interaction between callED and callING party, the ongoing use of reputational analytics to supplement STIR/SHAKEN will remain a critical step in reducing the amount of illegal calls across the network. To understand the necessity of reputational analytics moving forward, we’ll share some examples from Numeracle partner, YouMail, who specializes in analytics engines (AE) that employ event-based and content-based analytics, both of which “provide scoring to inform communication service providers and enterprises.”

“This scoring allows them to determine what to do in terms of call treatment (block, label, or redirect) when presented with robocalls that involve telephone numbers that have previously received algorithmic treatment.”

A higher ‘risk’ score leads to more severe warning language as presented to the consumer in the form of a call label. Risk scoring or risk ratings can also result in calls being blocked at the network level when they become classified as “Scam” or “Fraud.” Again, this is not the result of the STIR/SHAKEN framework, this is the result of a call’s negative reputation leading to its blocking or diversion to voicemail based on reputational analytics.

Regardless of whether or not your voice service provider (VSP) or contact center provider is STIR/SHAKEN compliant, your calls can still be blocked based on negative reputation alone. This is the unfortunate reality, but one of the greatest allies to businesses looking to solve this issue today are VSPs that are taking a leadership role not only in STIR/SHAKEN deployment, but also in the management of number reputation for their customers.

For any businesses conducting outbound calling, the answer to removing Spam labeling does not lie within STIR/SHAKEN compliance. The path begins by establishing a clean calling reputation, which businesses can do by establishing themselves within the analytics ecosystem as a Verified, legal business and identifying phone numbers used as being associated with a legitimate business purpose.

Outside of number reputation, many businesses are still looking to achieve the highest degree of STIR/SHAKEN Attestation as a measure of future preparedness and compliance.

For those who want A-Level attestation, start by having a conversation with your provider to review how they’re signing your calls today. If they’re not providing you A-Level attestation, ask if there are any internal policies they have that can elevate you to A. If a policy either does or does not exist with that provider, it’s then up to you and your business to decide what you need to do to get to the level you determine is most meaningful for your business. Until we’re at the point across the industry where there’s a clear differentiation in how A-Level, B-Level, and C-Level calls are actually presented to the subscriber, the best thing you can do is empower your organization with knowledge around the subject.

As reputational analytics remain in place as the primary determining factor to call presentation today, it’s imperative to establish visibility into the reputation of your phone numbers and take steps to remove the roadblocks of improper call blocking and labeling in order to protect your brand identity and retain the trust of your consumers moving forward.

For more information on the division between reputational analytics and STIR/SHAKEN, read our whitepaper: “Understanding Call Blocking and Labeling,” or visit our STIR/SHAKEN Knowledge Center.